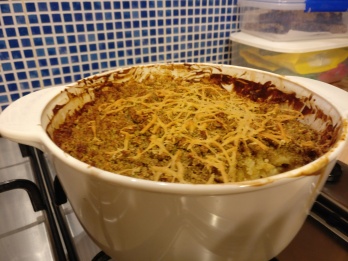 Macaroni Cheeze, straight from the oven

I’ve been a vegan for a year but it took only a few days before I learned to loathe vegan “cheeses”. None of the so-called vegan cheeses taste like the dairy versions. So it’s going to be a tough ask to make a macaroni cheese that tastes like the original, authentic comfort food we all grew up with.

This version is pretty close though. It’s roughly based on Jamie Oliver’s Mac ’n’Cheese recipe. I served it last night to my two omni, cheese-eating teenagers who declared it was “pretty good”. Believe me, that counts as high praise from them.

In fact they cleared their plates and both decided they’d take the remainder for their lunches. I’m claiming this recipe as a success.

Green vegetables make a nice accompaniment to this. We had oven-roasted broccoli but green (French) beans or a small salad would be good too. Or chips, if you’re English like me 🙂

This site uses Akismet to reduce spam. Learn how your comment data is processed.