I loved going on holiday to Tokyo, it was the trip of a lifetime. To be honest, I’m a city person and Tokyo is the ultimate city. It’s the largest metropolitan area in the world with nearly 38m people, which is as big as New York and London combined! (Source:  Wikipedia, BBC News)

This means you can’t just rock up there and hope to see everything in an afternoon. I doubt you could see most of it in a month. You’ve got to do some homework first. As well as looking at where to stay, what the different areas of the city were like, touristy places to visit etc, I knew that going there as a vegan would be difficult. The whole concept of “vegan” is largely unknown there – more on this shortly.

Before we travelled, we spent a full month working our way through countless forums, articles, blogs, Facebook groups (the Vegan Travel Facebook Group is full of very helpful people) and YouTube videos. I made a lot of notes while I was there too (in preparation for a return trip 🙂 ) and I will post everything on here for my future reference and as a resource for anyone else who needs it.

Visiting Japan as a vegan

There are so many good articles online about being vegan or vegetarian in Japan. Here are just a few that helped us:

Made in our apartment: Miso soup with spinach, spring onions and fresh tofu

Since we were staying in an Airbnb apartment, we were self-catering and cooking for ourselves. We do this whenever we go abroad and we both like cooking, so it’s no trouble for us.

To make life easier, we packed a few “starter” foods in our suitcase so we could make our first couple of meals without worrying where the nearest shops were or what we could buy. Typically, packets of dried couscous, pasta etc only weigh 100-150g each so you can get a lot of good food in just 2Kg of your luggage allowance!

We took with us:

All of these are easily available in the UK from Tesco, Sainsburys, Asda etc and the total cost was less than £15/€17/$19. 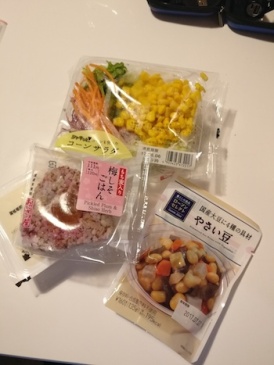 For day-to-day food shopping in Tokyo, we relied heavily on the konbini, which are small local supermarkets and convenience stores that are absolutely everywhere. There’s pretty much one on every street. The most common are 7-11, Lawson and Family Mart.

Oh and the Google Translate app is a lifesaver for checking ingredients on the fly. Who knew that crisps (potato chips, if you’re American) needed to have pork and shrimp in them. Gross. 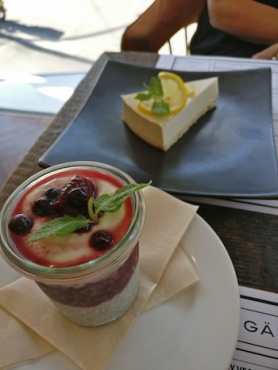 When we wanted to eat out, we used the Happy Cow app heavily. It’s always been brilliant for us in Europe but sometimes it’s less accurate for directions here in Tokyo. The Japanese system of street addresses is quite complicated (it seems a bit random sometimes) and often things just aren’t where they’re supposed to be!

Eating-out highlights for me were firstly Organic Table by Lapaz (website – mostly in Japanese), whose soy meat was the best I’ve ever tasted and whose desserts (a raw trifle and a lemon cheesecake) were outstanding:

…. and secondly T’s Tantan Noodles (website – in Japanese). This vegan ramen restaurant is located inside Tokyo’s main train station and has near-legendary status among vegans and vegetarians visiting Japan. It comes up regularly on lists of great-places-to-eat-in-Tokyo and deservedly so. The food is delicious: 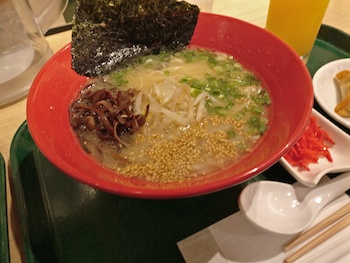 20 thoughts on “Peverilblog’s Notes from Tokyo. Part 1: on being vegan in Japan”

This site uses Akismet to reduce spam. Learn how your comment data is processed.